Millions watching the European Games sporting tournament in Baku, Azerbaijan witnessed a few brief flashes of Europe’s forgotten conflict, yet most people remained completely unaware. It was to be expected. Twenty seven years of war between Azerbaijan and Armenia, bombings, shootings, prisoners of war and the subsequent 30,000 deaths have elicited barely a mention in the international news media to this day, despite the renewed focus on the fragility of post-Soviet space prompted by the Ukrainian crisis.

The inaugural European Games – a continent-wide sporting extravaganza featuring 6,000 athletes from over 50 different countries – was a chance for Azerbaijan to flaunt the fruits of its oil boom. Construction of a host of stadia, accommodation villages, manicured gardens, press centres and paved highways cost an estimated $10bn. It was also an opportunity for sportsmen from neighbouring Armenia to compete in the country with whom they have fought for nearly three decades and are essentially banned from entering. The European Olympic Committee was instrumental in both encouraging Armenia to attend, and for Azerbaijan to agree  – a decision that became a very divisive public debate in both countries. 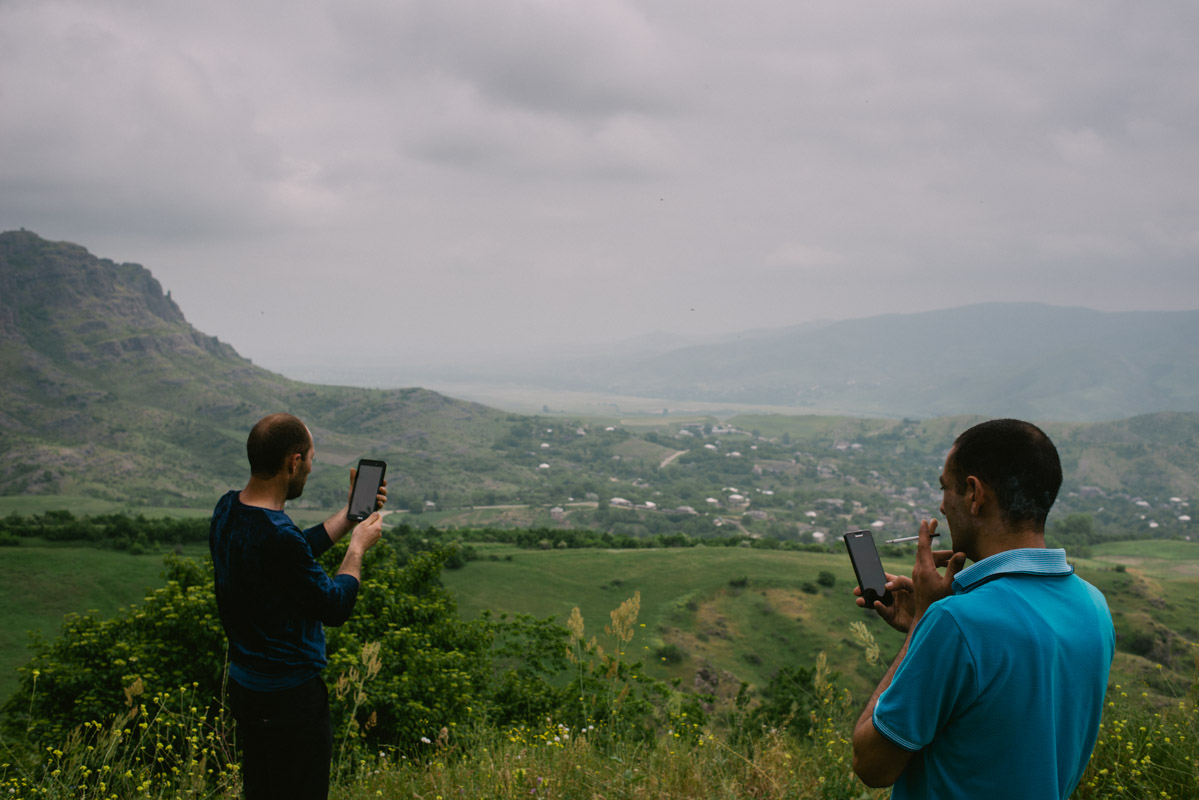 Two Armenians photograph the village of Aygepar in the region of Tavush, Armenia. The houses are near the closed border with Azerbaijan where sniper positions face each other on both sides. Violations of the 1994 ceasefire are frequent along the main border between the two countries. Most of the casualties are soldiers but villagers and farm animals are also targeted. 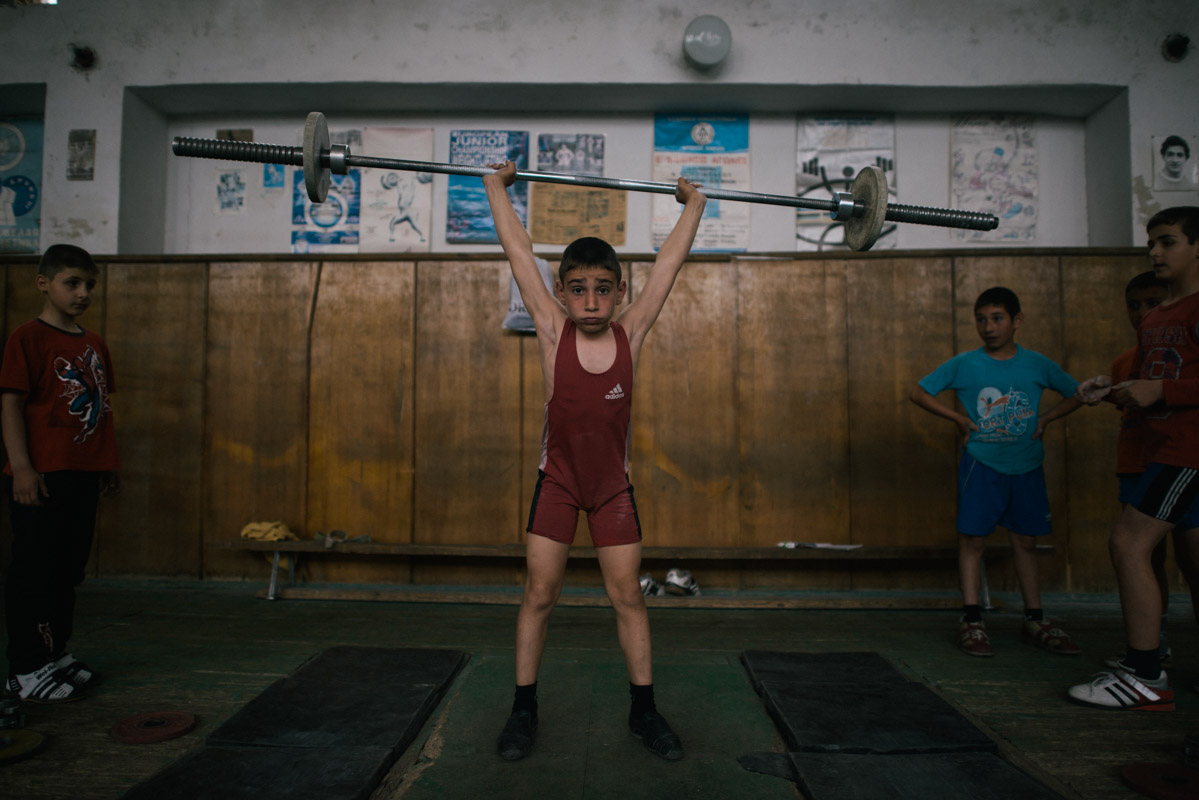 A child trains weightlifting in the village of Geghakert, Armenia. The run-down gym produced several world champions but many athletes choose to migrate to other countries due to the dire economical situation of Armenia. After 1991, the country remained geographically isolated, cut off from Azerbaijan and Turkey, and industry formerly dependent on the Soviet Union collapsed. 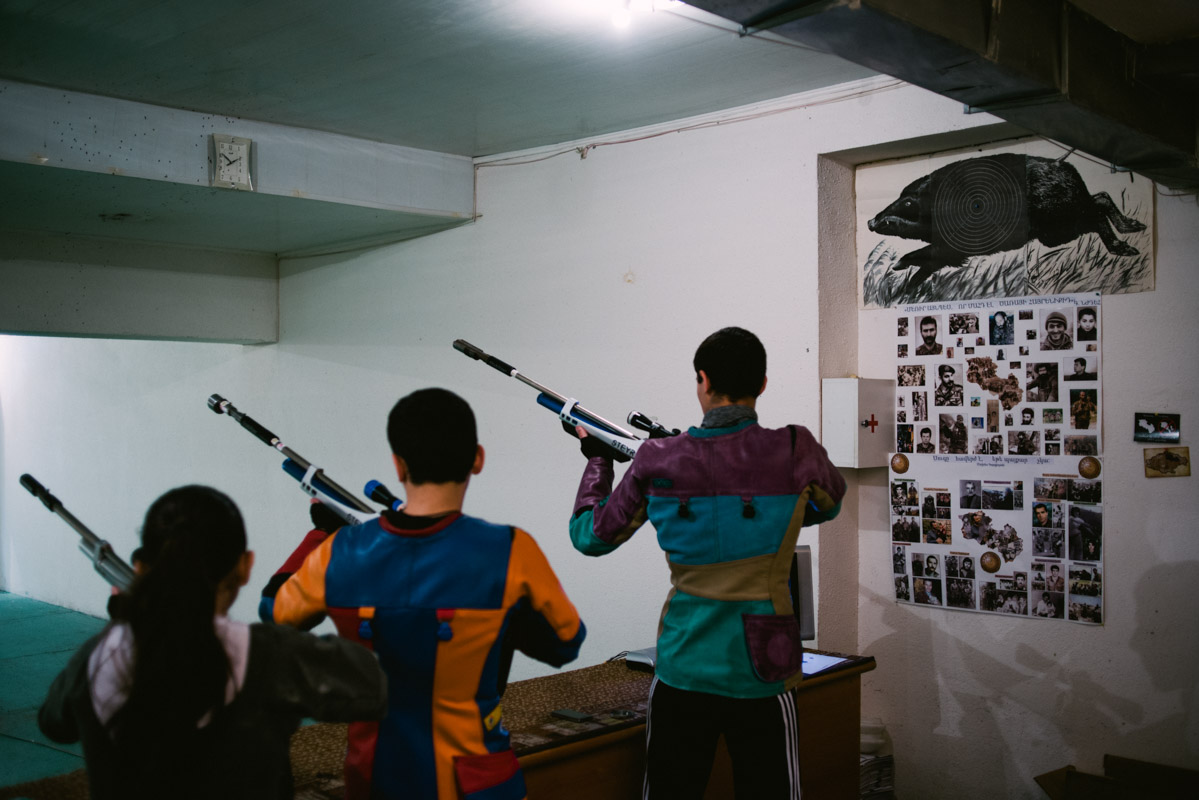 Armenian shooters train at a range in Yerevan underneath a poster of Nagorno-Karabakh’s war veterans. The region is currently a de-facto independent state, not recognised by any countries in the world and supported by Armenia. The territory is considered by the international community as part of Azerbaijan. 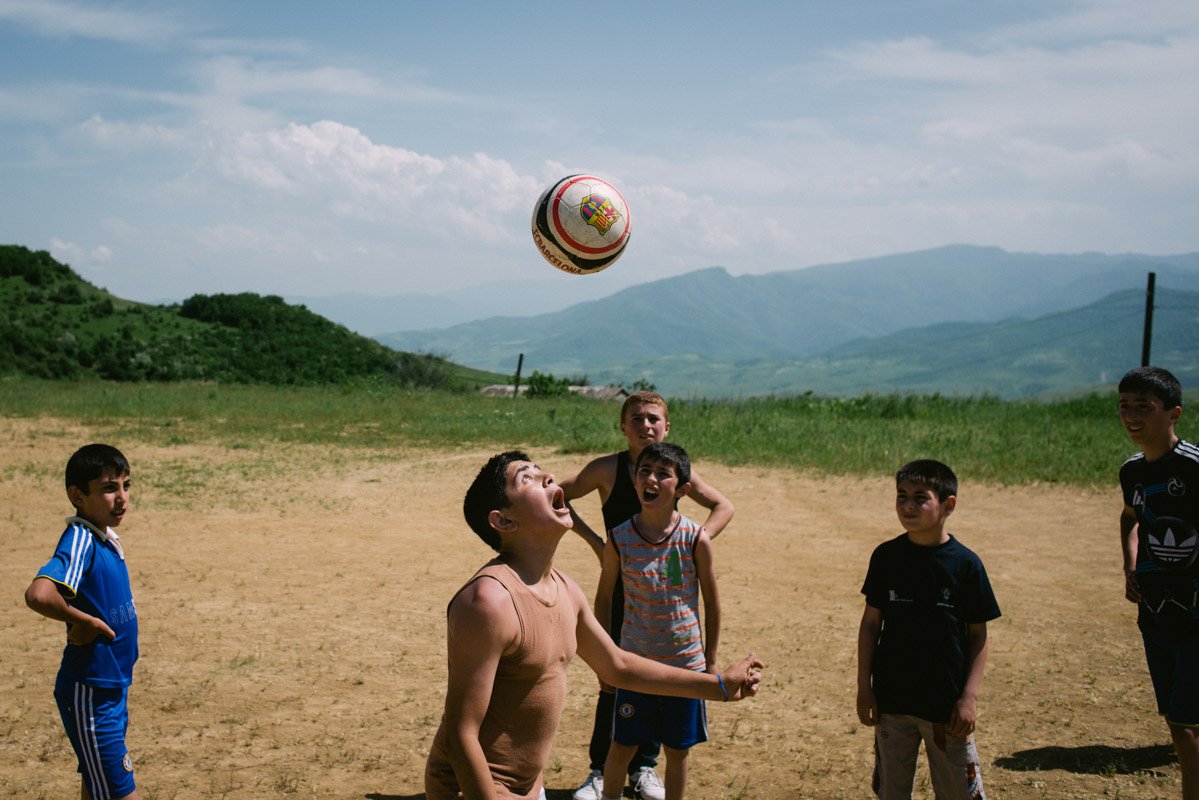 Armenian children in the football ground by the village of Voskevan near the border with Azerbaijan. The ground is in the shadow of sniper positions and the children have to consult with their parents, or the military, to play at times when there is calm on the frontline. 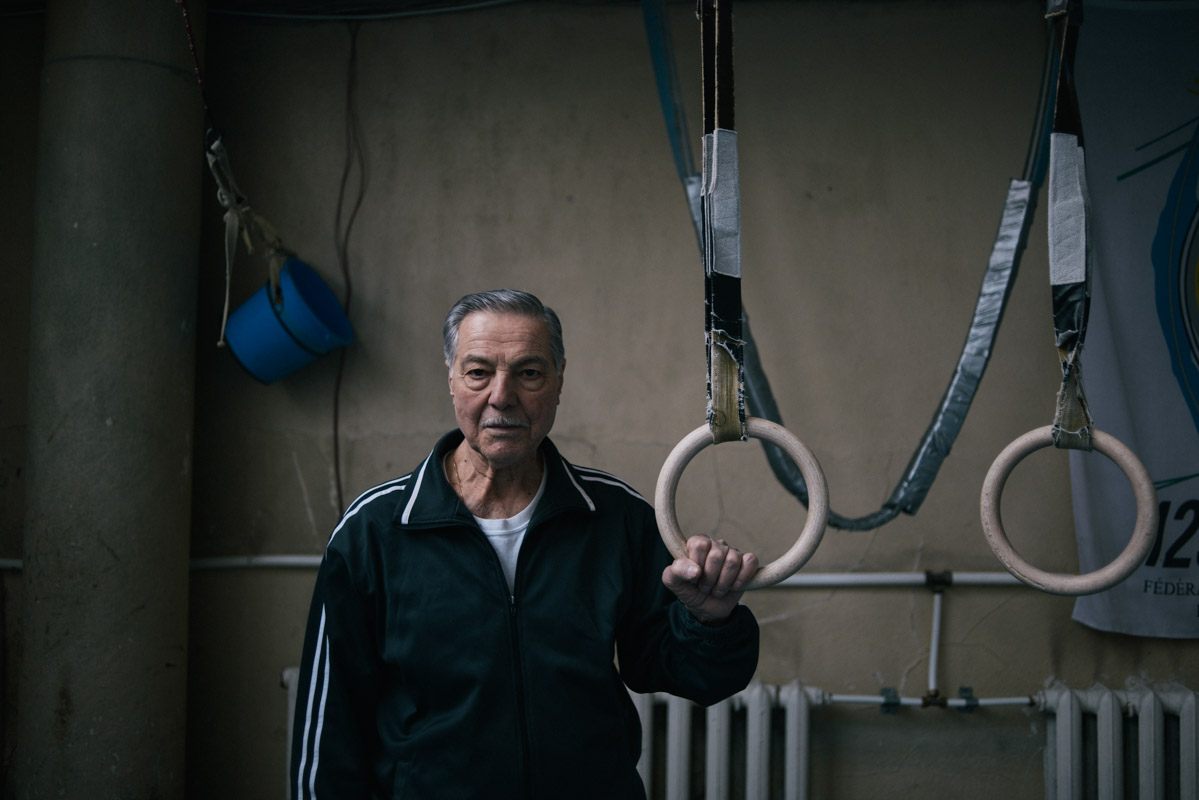 Albert Azaryan, 86,  is a sporting legend of the Soviet era, in a time where it was harder for smaller republics of the Union to shine. Thanks to the strength he gained working as a blacksmith in Kirovabad (currently Ganja, Azerbaijan), he was the first gymnast to win two consecutive medals for rings. The incredible contortion of his signature ‘Azaryan cross’ move has rarely been copied. 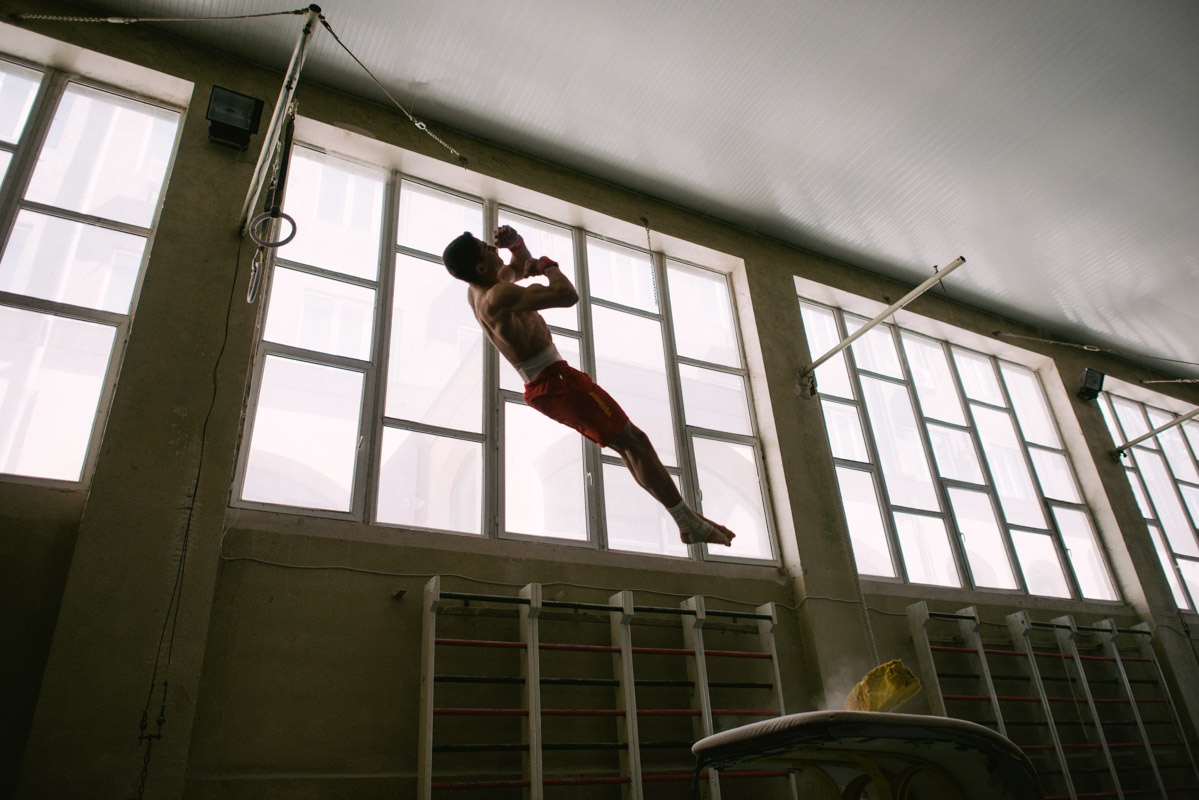 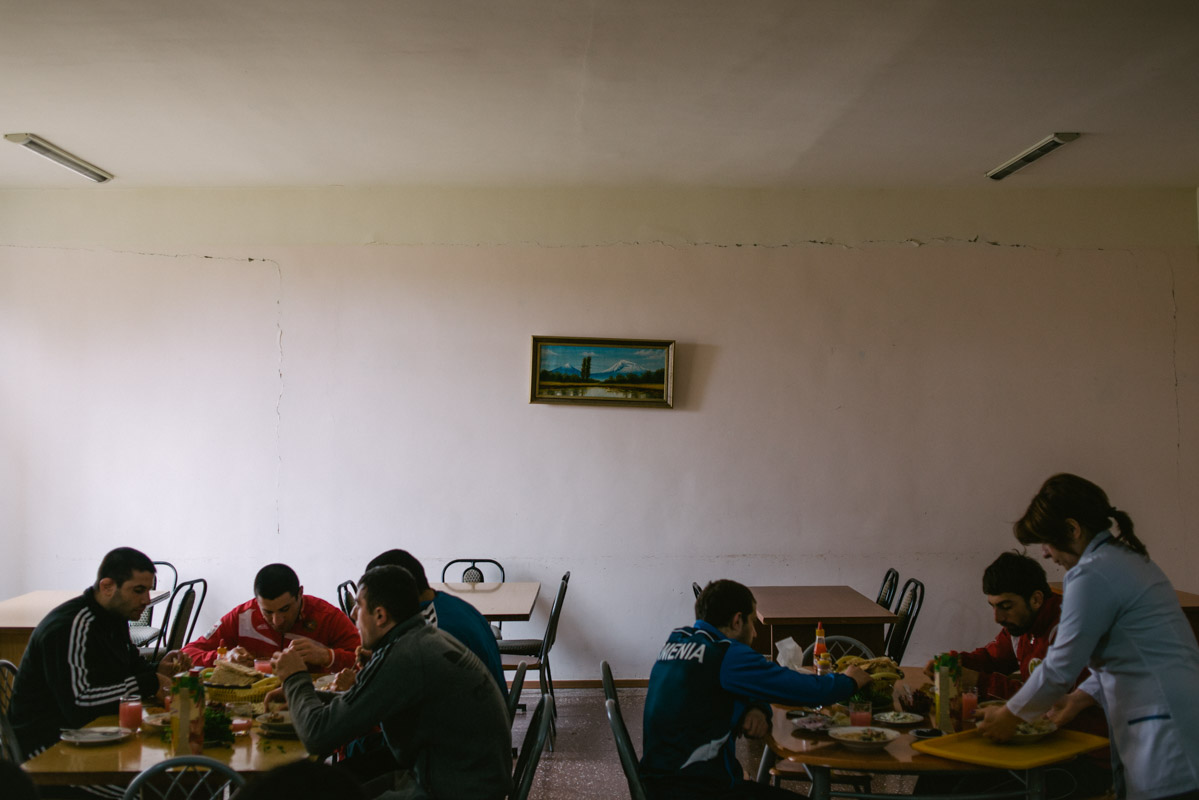 Lunch of the Armenian National Sambo Team in a training facility in Abovyan, Armenia. Sambo, a mixture of judo and wrestling is a common sport in post-Soviet countries and has its origins in the Red Army. 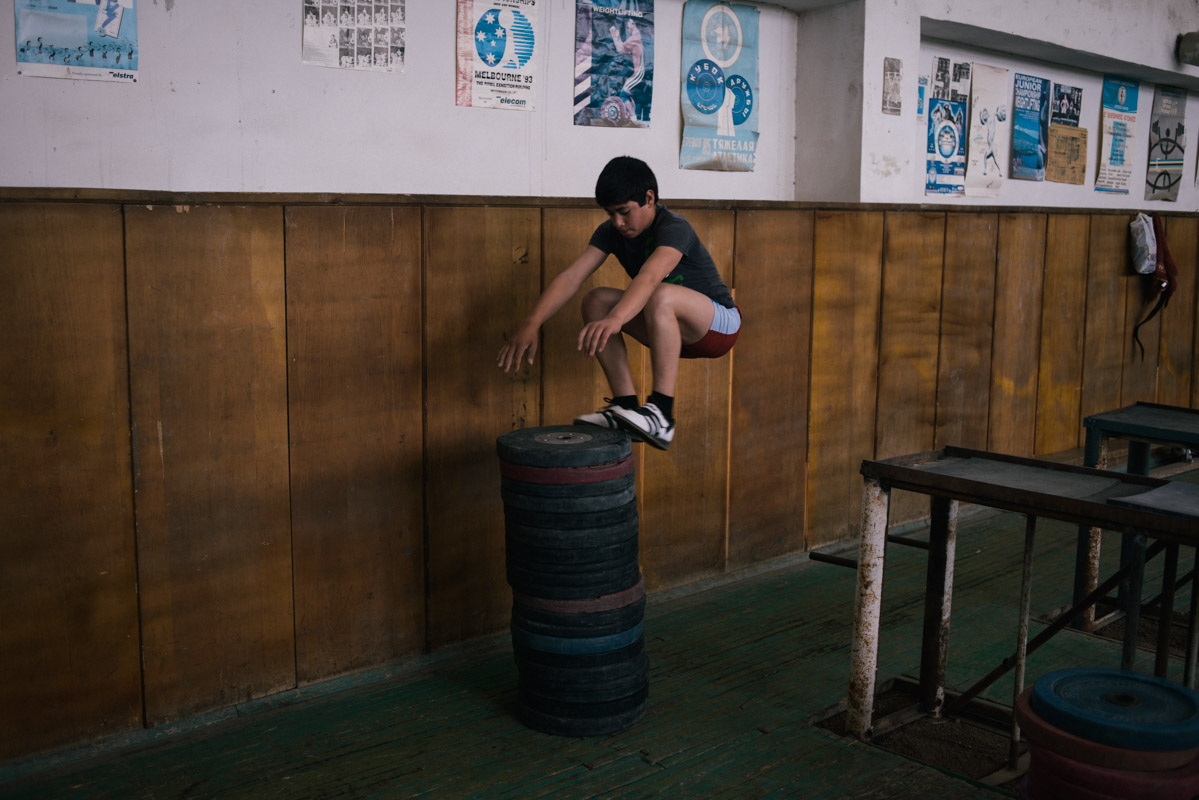 A child trains weightlifting in the village of Geghakert, Armenia. Both Armenia and Azerbaijan, as in the whole Caucasus, excel in sports of strength and fighting. 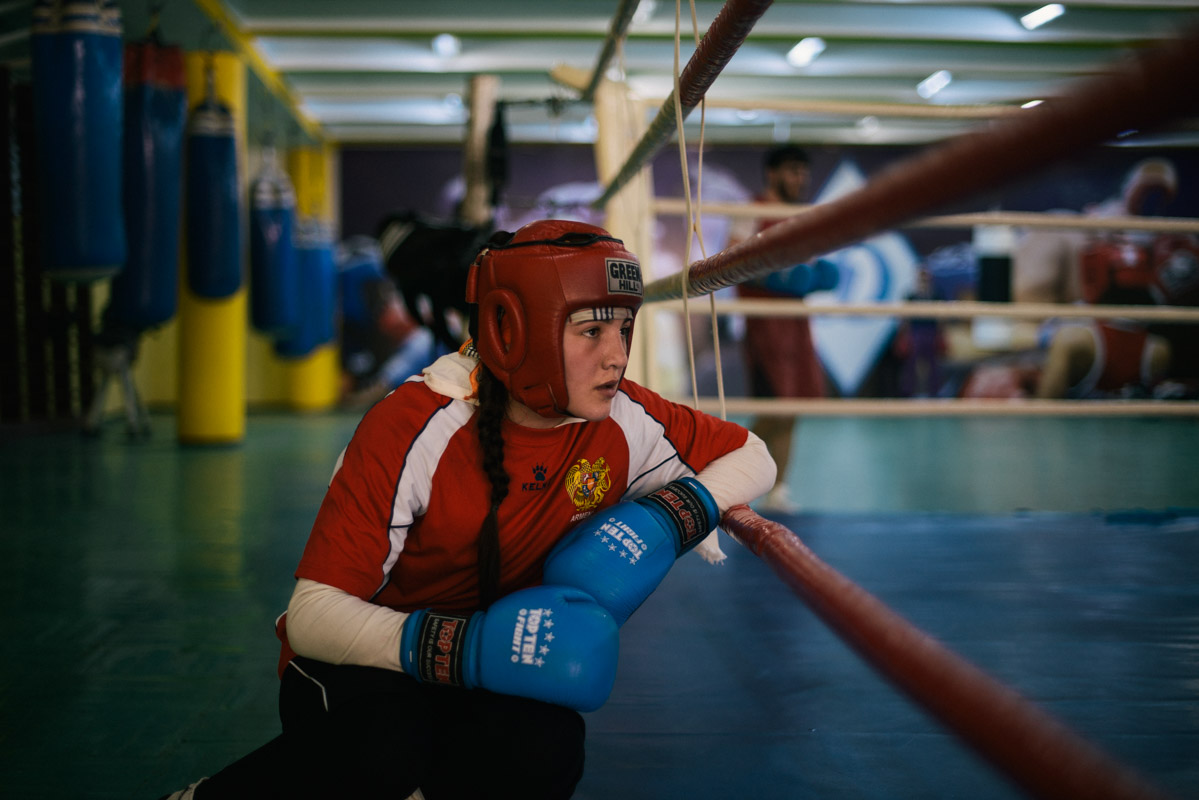 A boxer rest during a training of the Armenian National team in Yerevan. Despite the symbolic importance of winning a gold medal in Baku many athletes protests they couldn’t trust security in enemy territory and that judgment would be unfair. 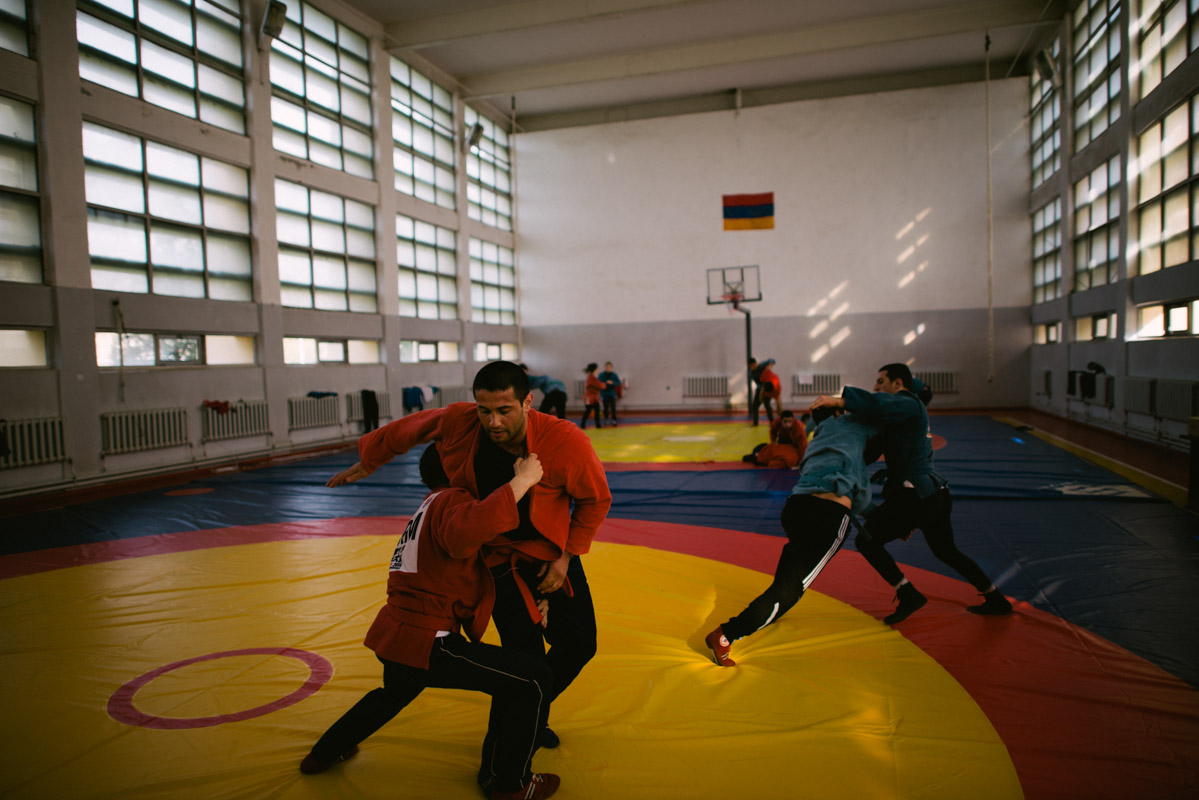 Sambo champion Ashot Danielyan, trains with the Armenian National Team in Abovyan. Ashot was born in Nagorno-Karabakh and during a recent medal ceremony in Moscow, his Azerbaijani opponent squatted in protest during the national Armenian anthem. 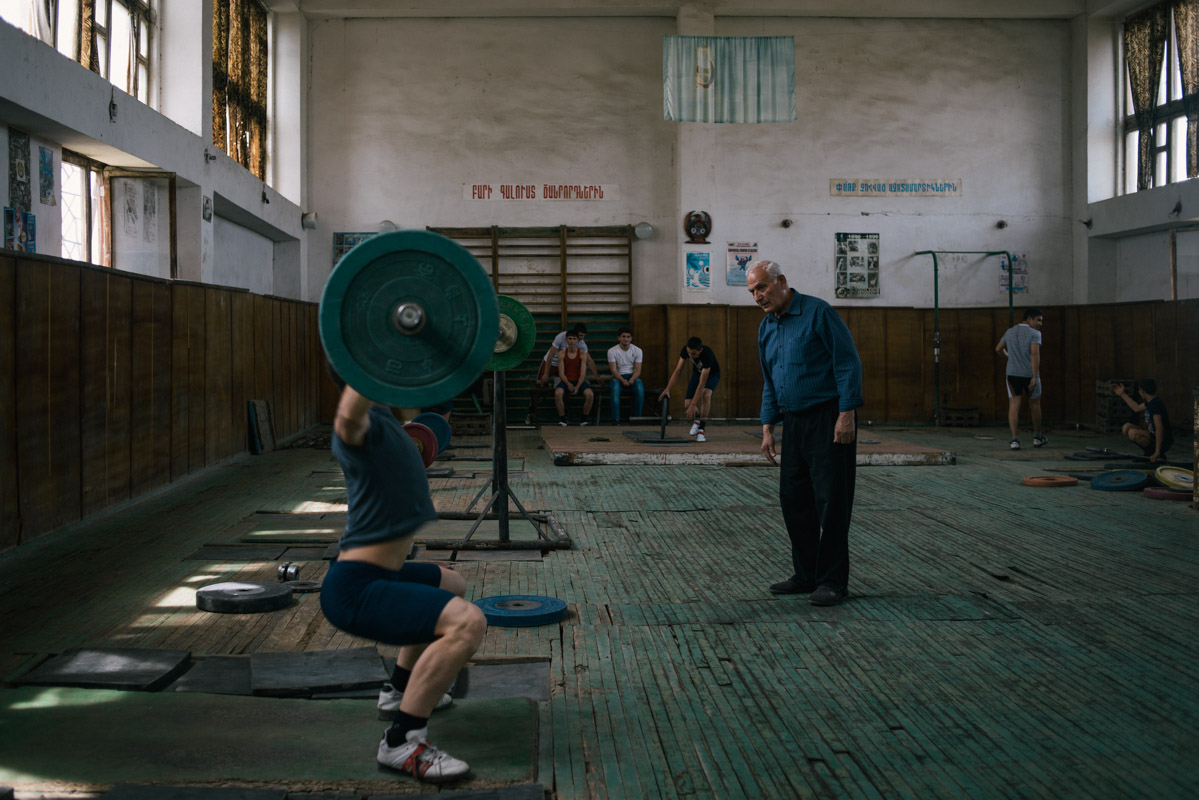 Felix Aliyev, 76, coaches a pupil in Geghakert, Armenia. In the 90s, during the ethnic conflict between Armenians and Azerbaijanis, many escaped to their respective countries and the few who decided to stay had to conceal their real identities. Felix Aliyev never hided his roots (he shares the same surname as the president of Azerbaijan) and during the war, his pupils took shifts to protect him. 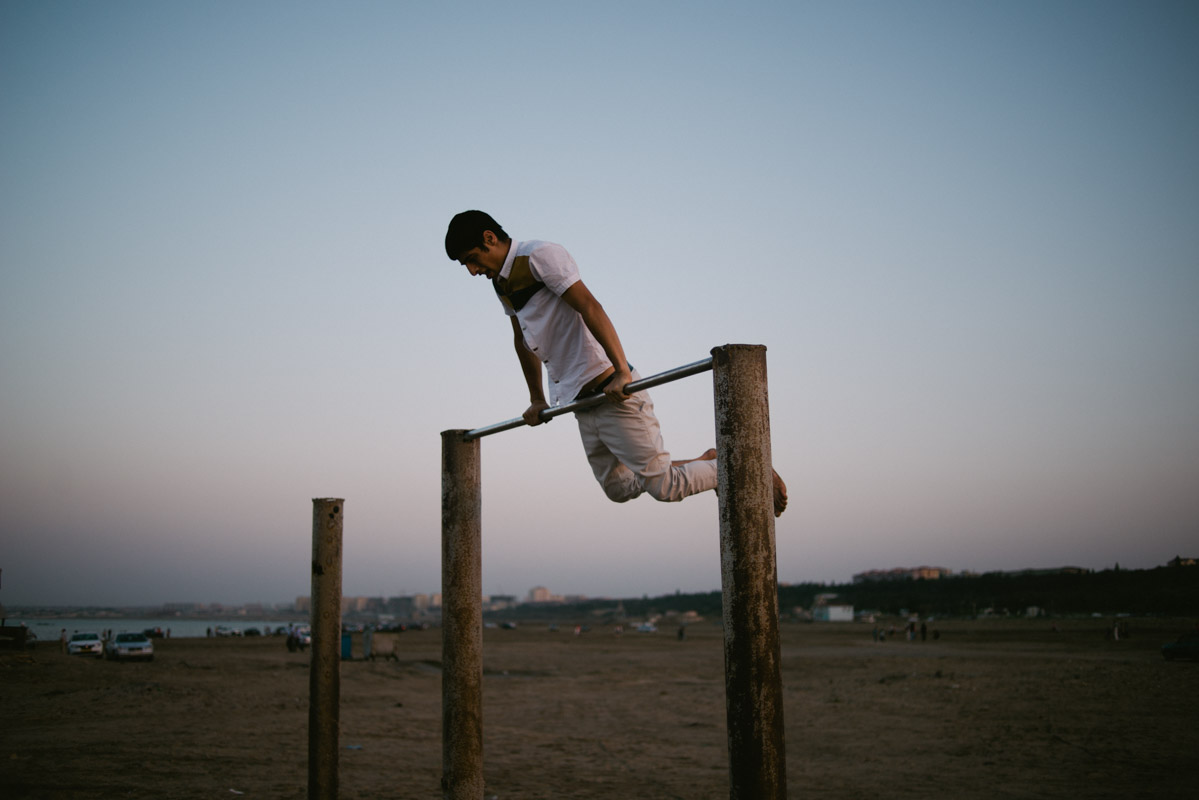 A man performs a muscle up besides the Caspian Sea in Sumgait, Azerbaijan. During Soviet times Sumgait was the major petrol chemical hub of USSR and was home for both Armenians and Azerbaijanis skilled workers. 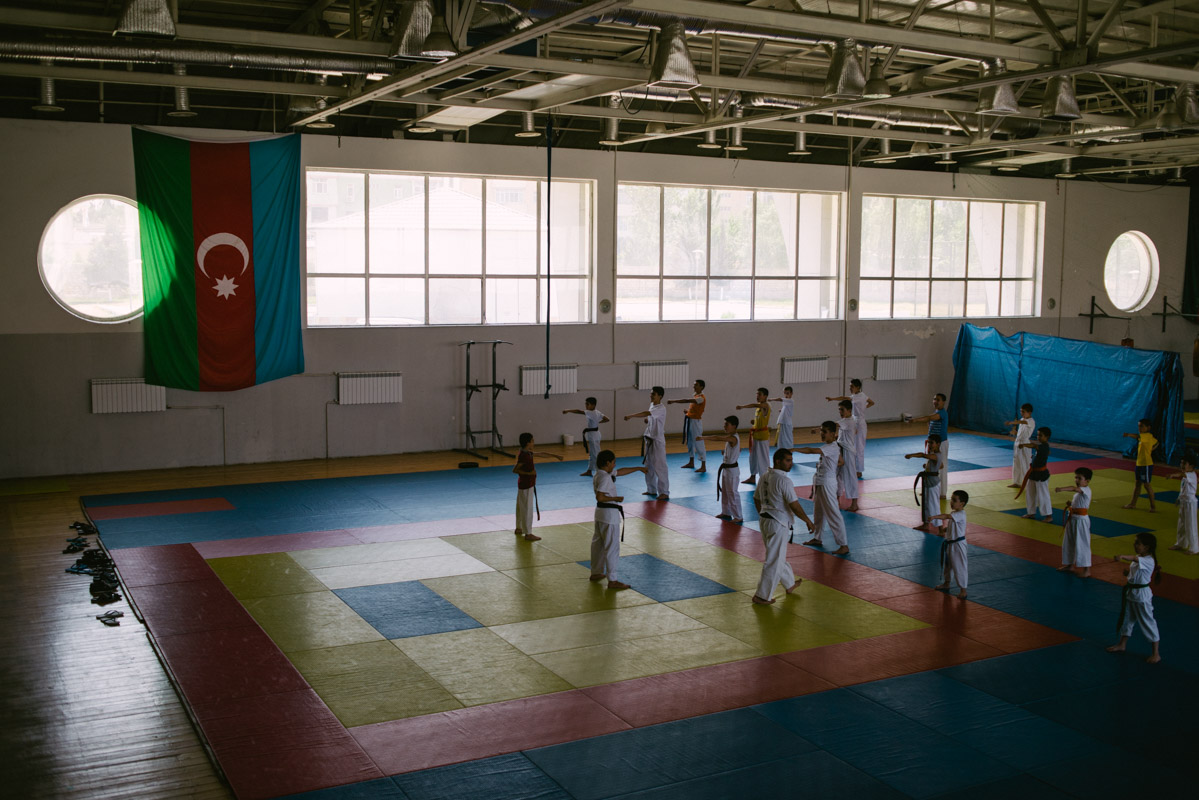 Children during a lesson of Karate in the freshly renovated Heydar Alyev Sport Complex in Sumgait. In 1988, as Soviet Union was cracking apart, Sumgait was the theatre  of one the very first post-soviet ethnic conflicts between Armenians and Azerbaijanis. 32 people were killed and nearly all of the 14,000 Armenian residents fled. 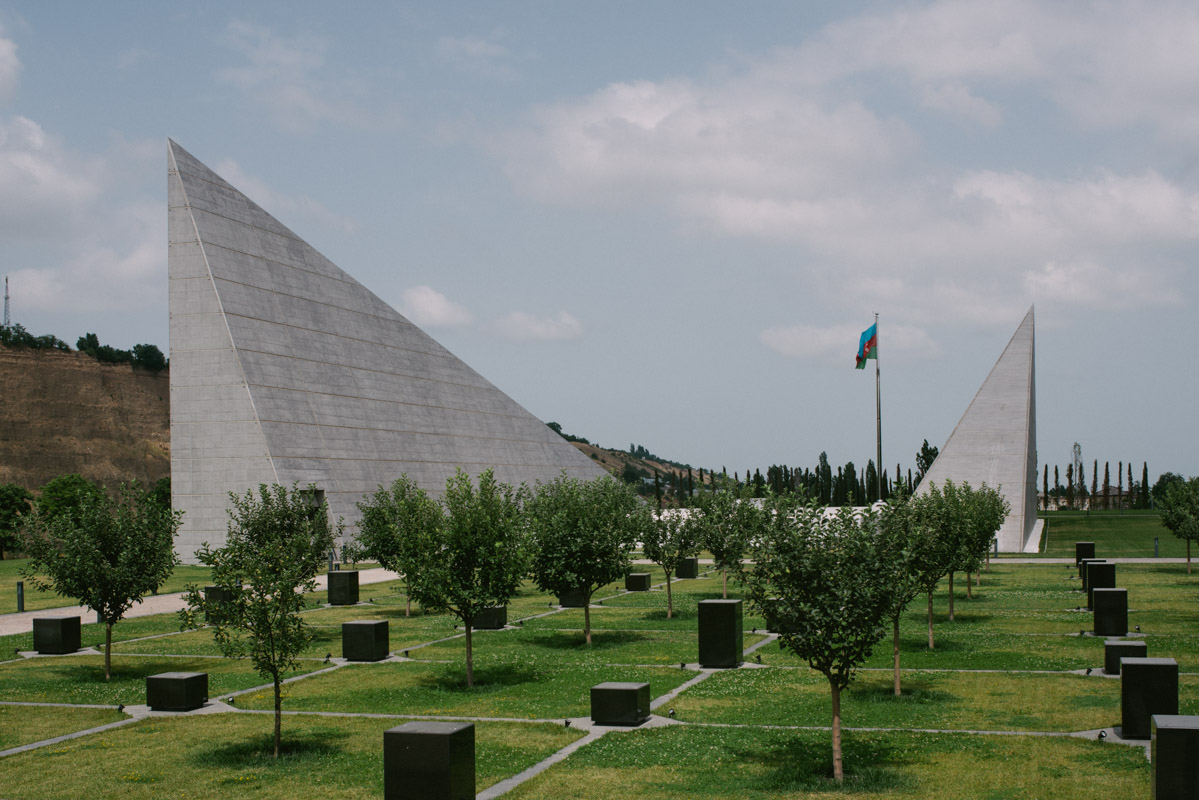 Guba Genocide Memorial. During the construction of a sport stadium in 2007 a mass burial was discovered. An Azerbaijani forensic study suggested a massacre of Muslim by Armenians in 1918. Immediately memorial was commissioned by the president Ilham Aliyev, while contested by Armenia. The past fights and mutual blaming between the two ethnic groups revamped during the collapse of Soviet Union. 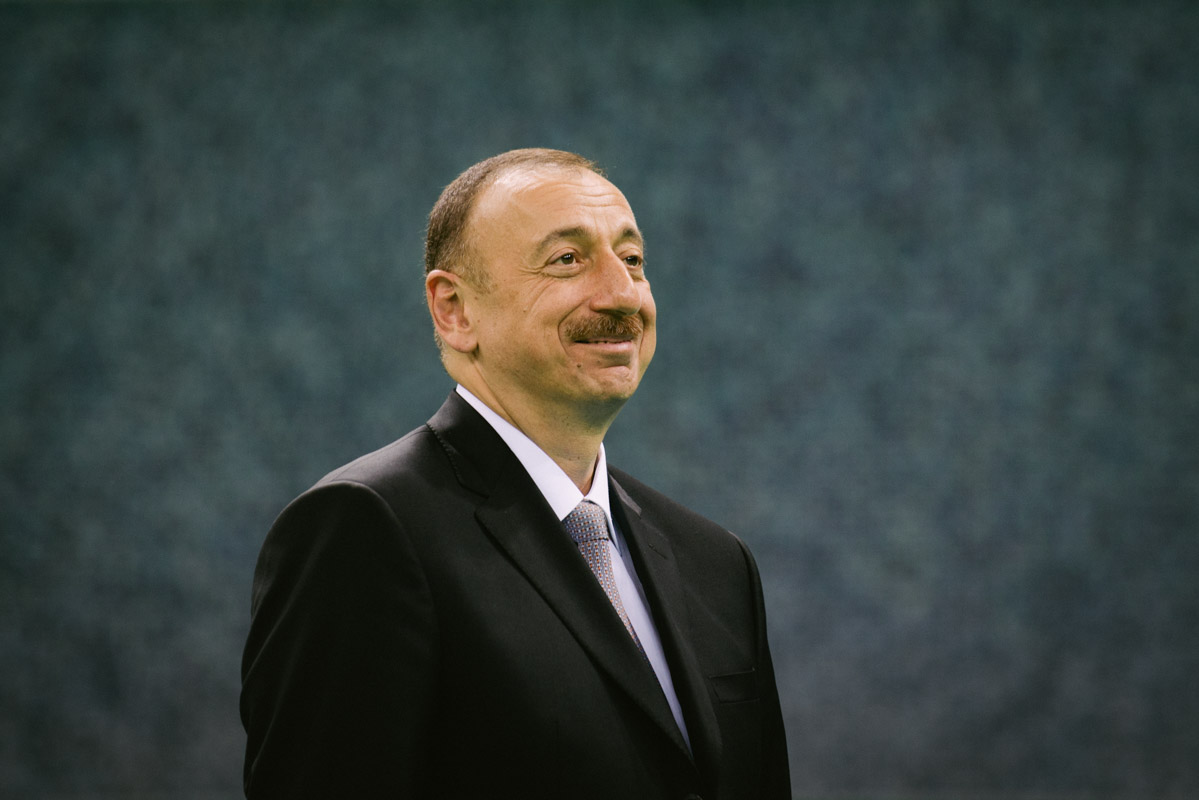 The president of Azerbaijan, Ilham Aliyev, 54, during the European Games in Baku, Azerbaijan. Since 2003, after the death of  his father Heydar, he rules the country. The Aliyev dynasty begun when Heydar, former leader of the Soviet Azerbaijan was elected in 1993 and ever since.  According to human right organisations elections in Azerbaijan lack of transparency and opposition is repressed. 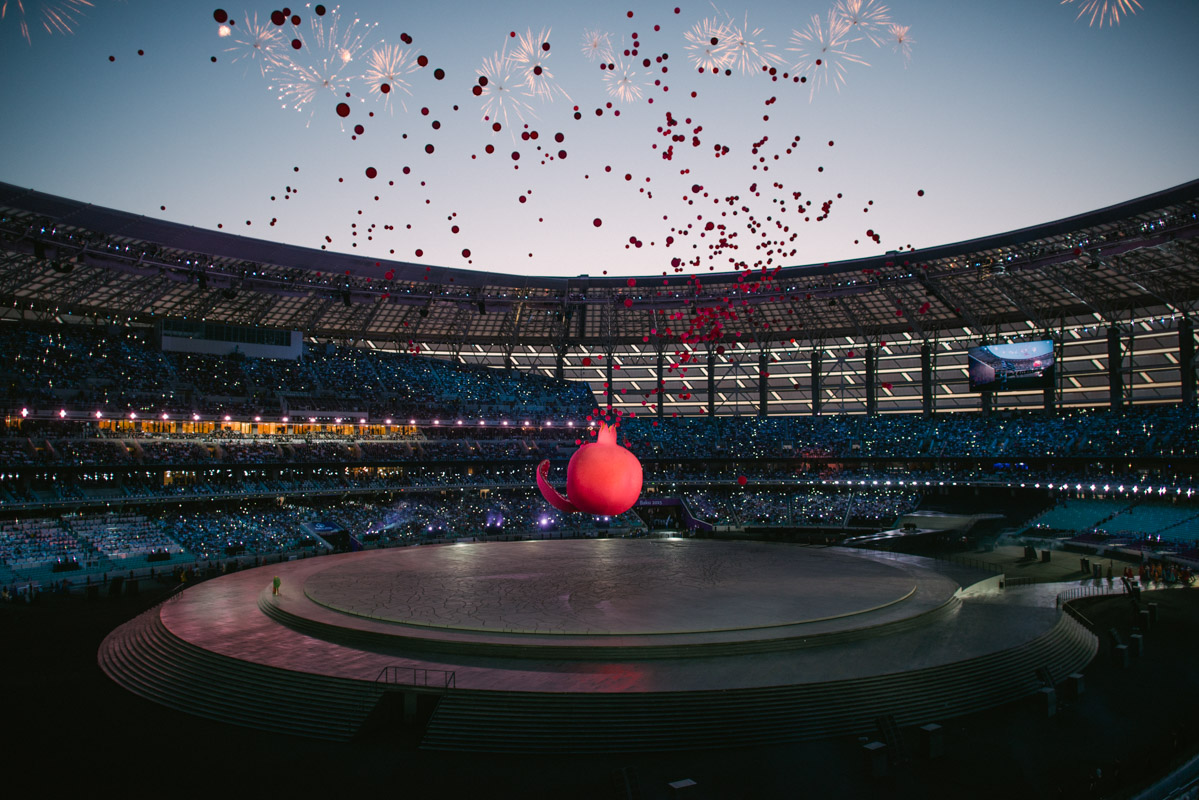 The elaborate opening ceremony of the European Games in Baku. A gigantic pomegranate opens up to release a flurry of heart-shaped balloons. The fruit is abundant in both Azerbaijan and Armenia and both countries consider it a national symbol. 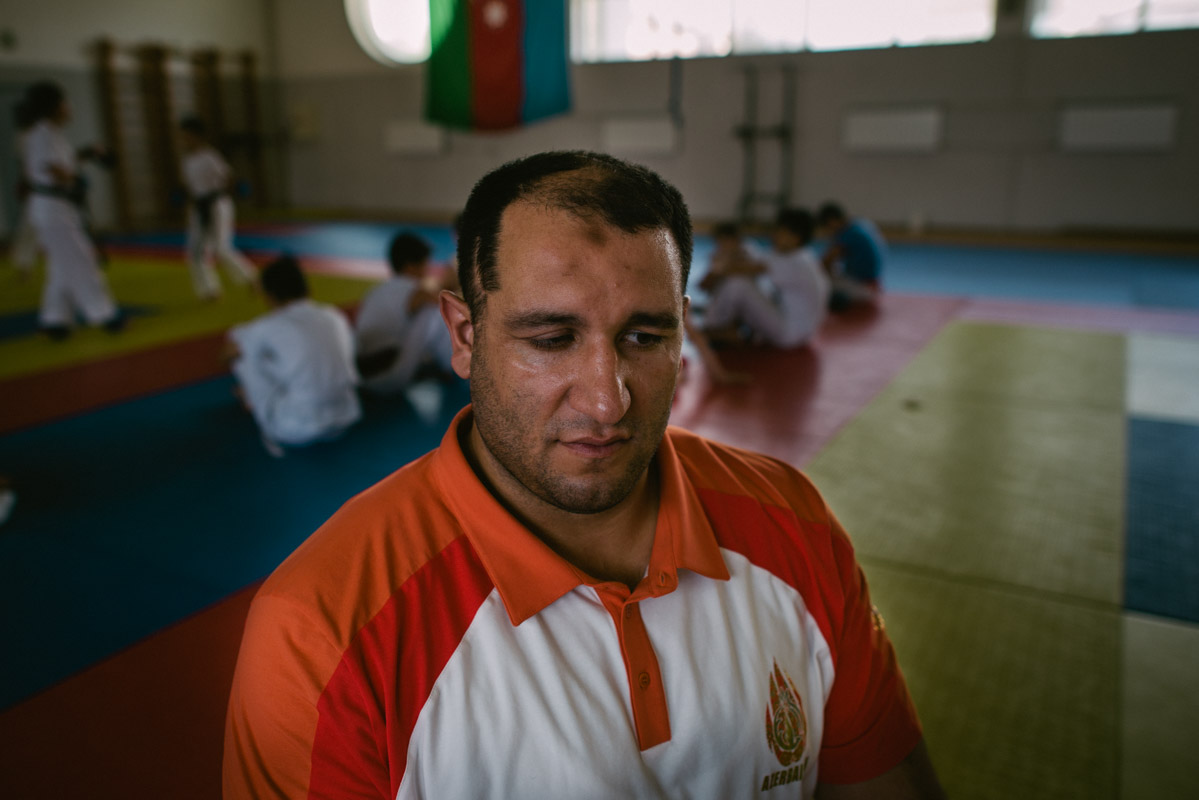 Chosen by president Ilham Aliyev as the final torchbearer to light the olympic fire, Ilham Zakiyev was a soldier on the frontline before he was shot in the head by an Armenian sniper and blinded. He is now a world champion Paralympic judoka. “My partecipation was a secret until the last hour, I know I was chosen to be a scream to the world to remind that 20% of our land is occupied by Armenians”. 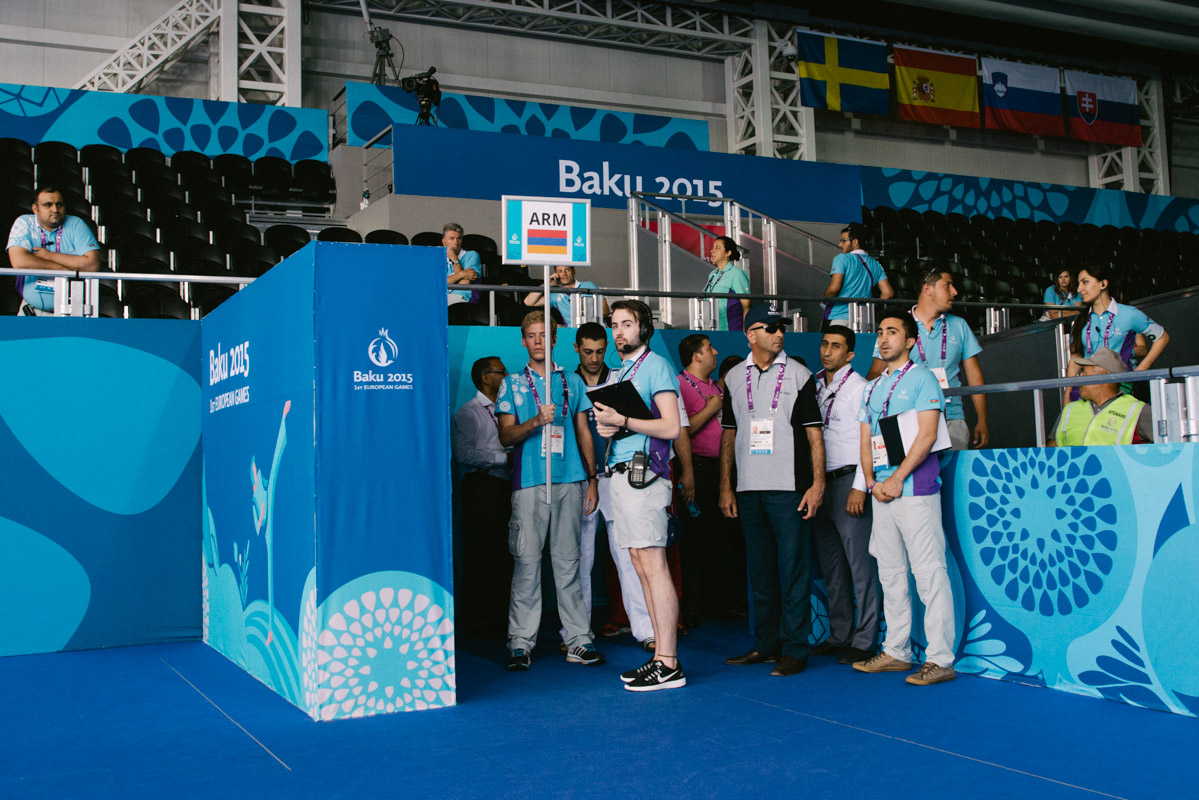 Arman Yeremyan waits to enter Crystal Hall Stadium before a Taekewondo match. Extra security was guaranteed for all the Armenians athletes who had to travel separately and resides in different building. 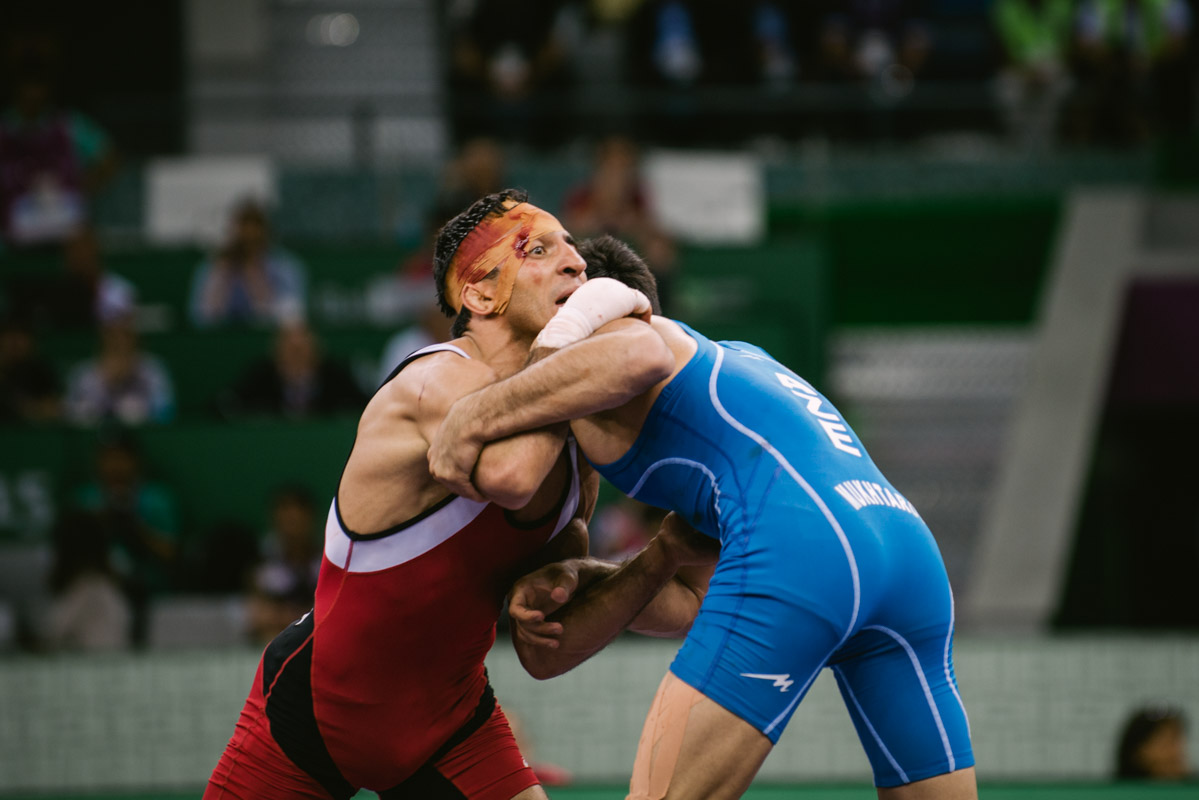 The armenian wrestler Roman Amuyan fight against the azerbaijani Elman Mukhtarov for the bronze medal in Heydar Alyiev Arena in Baku. 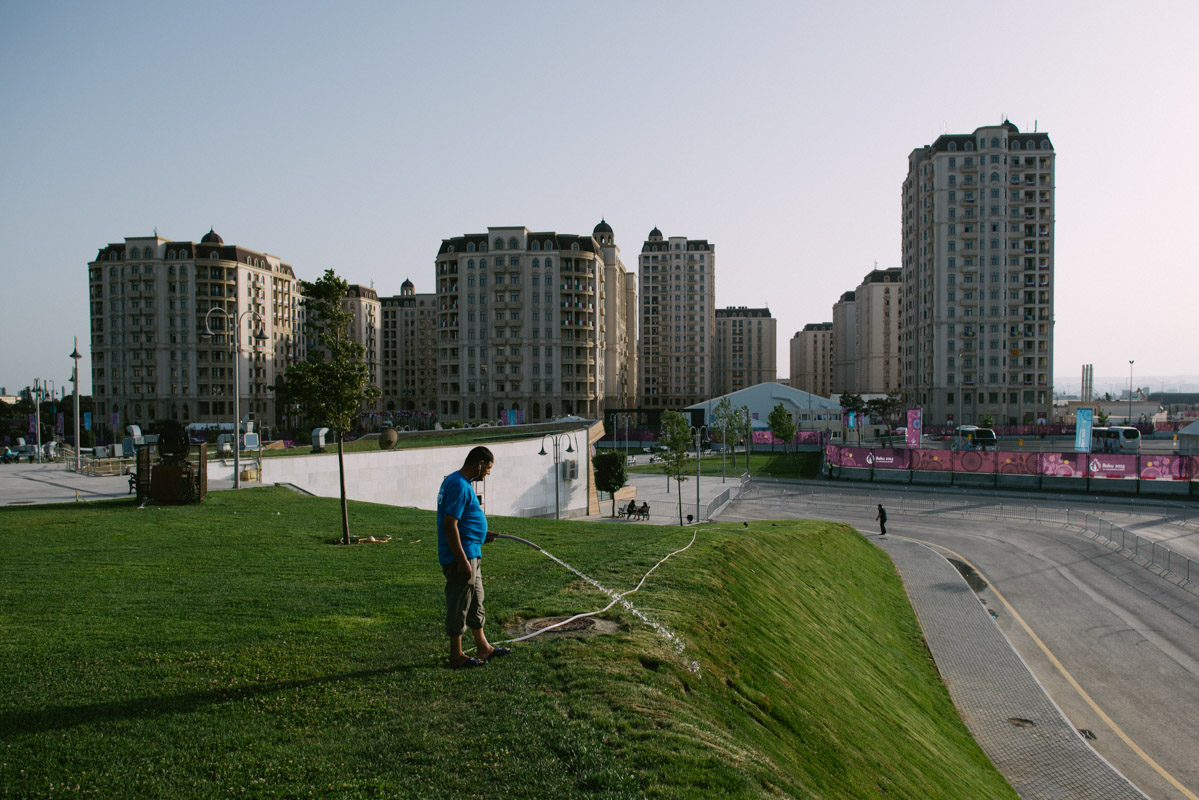 View of the Olympic Village in Baku. It has been speculated that the Azerbaijani government spent up to $10bn in preparation to host the European Games. Of more concern for Armenia is Azerbaijan’s dramatic increase in their military budget up to almost $5bn, more than Armenia’s entire domestic budget. Baku has consistently promised to use military force to regain captured territory if peace talks fail. 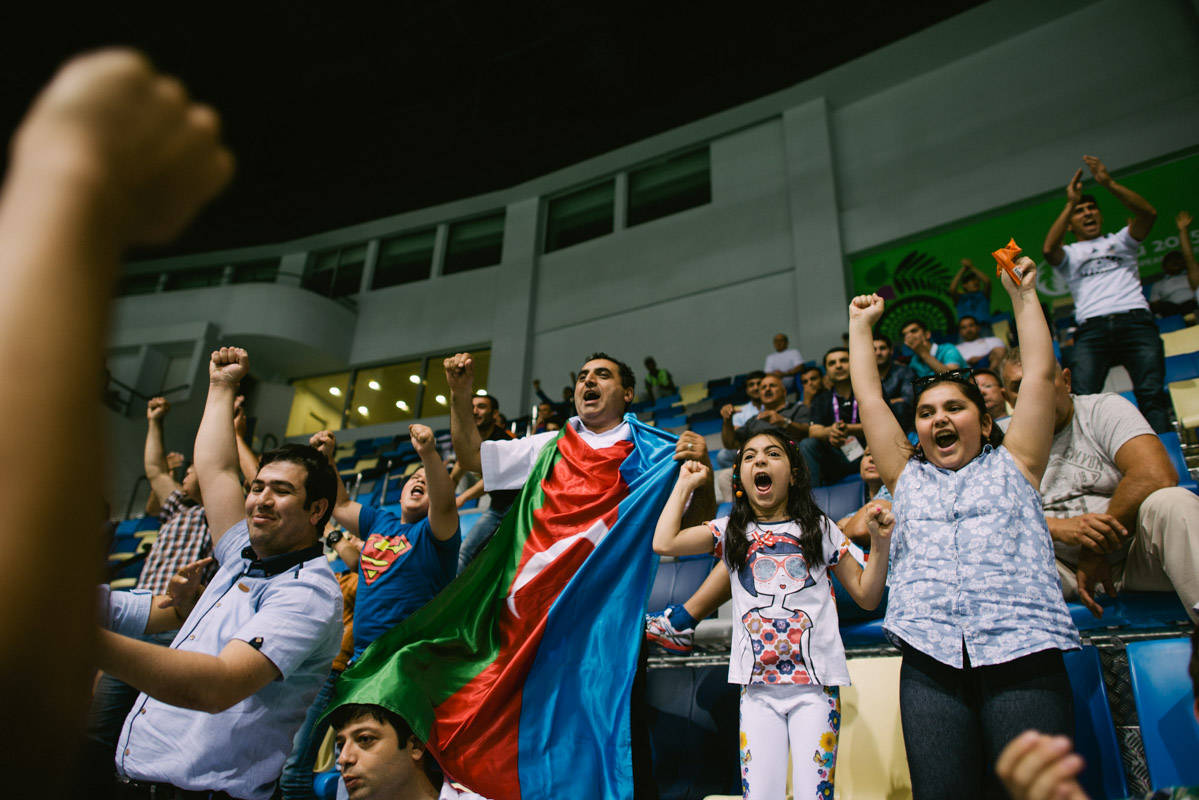 The public cheers the elimination of Armenia during a match. The government have never stopped to instigate hate towards Armenia. In 2012 Azarbaijan arranged the extradition of Ramil Safarov, an Azerbaijani soldier that murdered a sleeping Armenian soldier with an axe during a NATO language training in Budapest. Safarov was immediately lionised as a national hero prompting waves of outrage in Armenia. 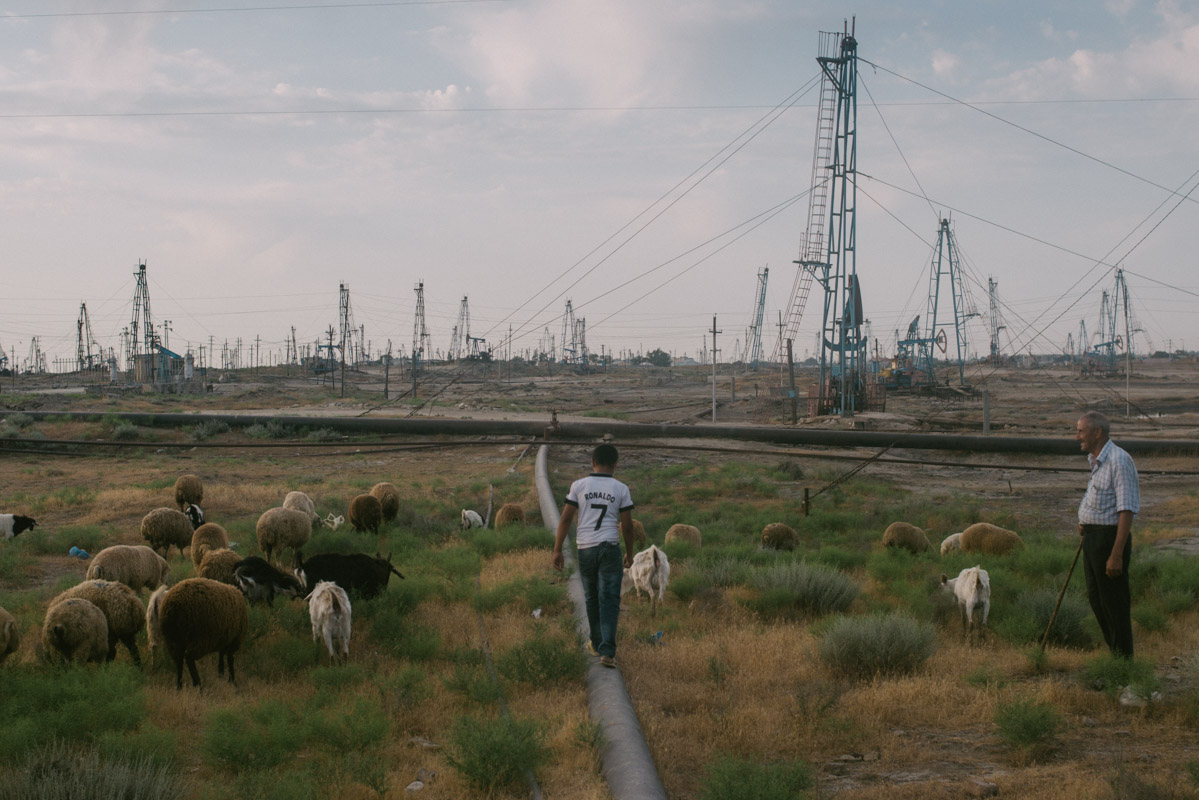 A young shepherd walks on a pipeline in the Balakhani oilfields where the world’s first oil industry was born. From the late 1800s, oil barons such as the Nobel dynasty spilled into the city and by 1900, Azerbaijan became the provider of half the world’s oil. Much of the land belongs now to SOCAR, the state oil company but profits are mostly redistributed among oligarchs, while inequalities are quickly raising.